I’m grateful to people who recognize that they simply can’t provide a proper home for their dog, and make the difficult decision to give up their friend. Most people do not realize how much time and effort it takes to do right by a canine companion. Many of them, unfortunately, do not discover the truth until after they already have a dog. Ideally, people realize their limitations early on and work to find a new home for their pet. Or let a rescue like Homeward Bound take care of it for them if they cannot.

Daisy came to us from such a home. Perhaps beguiled by images of the family raising a puppy together they brought Daisy into their lives. Daisy wasn’t neglected by any means. Her behavior is better in some ways than most pups her age. But her family realized that they didn’t have enough time to spend with her. She was left by herself for too long. And she started to display an unwelcome behavior: resource guarding. You can go to the link for more information but suffice it to say that resource guarding can be quite intimidating and even dangerous if it allowed to go too far. 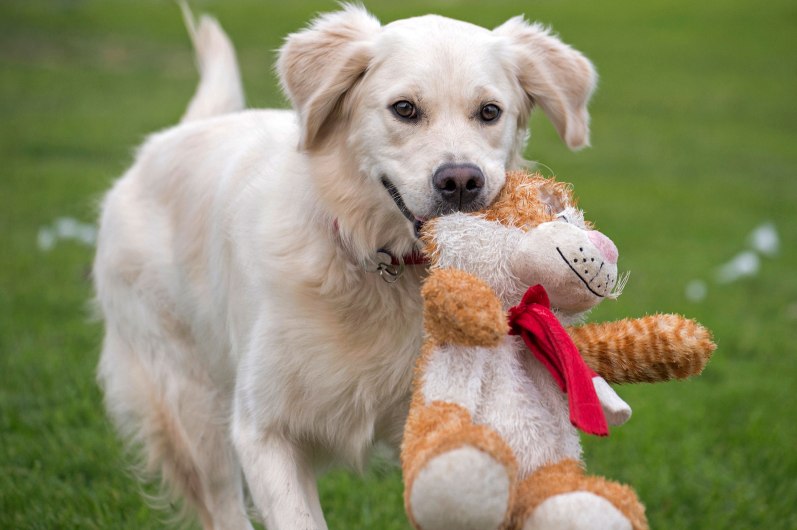 She loves her soft toys but will destroy them eventually. 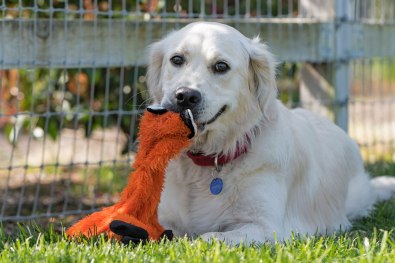 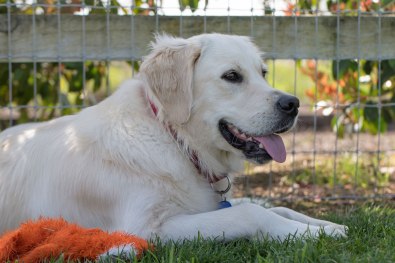 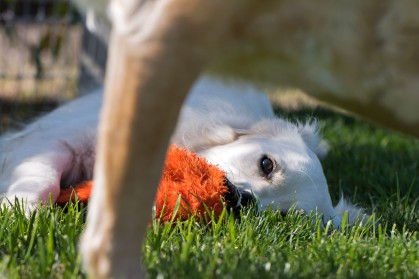 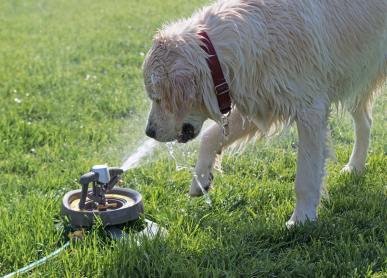 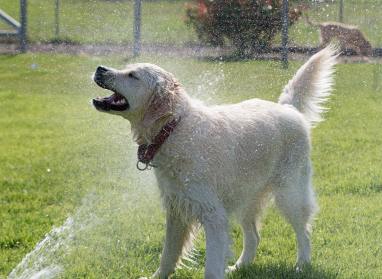 How did Daisy come to this behavior? We have no way of knowing. I’m certain there was no abuse or similar involved. Most likely it was the result of not understanding dogs and how their minds work. My guess is that it stemmed from the complex interrelationship among dog and human and dog’s toys and human possessions. At a basic level Daisy came to believe that she needed to guard her possessions or she would lose control. But somehow she also started attaching value to unusual things — or lack of something in some cases. With me she has guarded small holes she dug in the ground, a rubber mat I put down, and even the gap between the couch and the wall.

Daisy is staying inside with Scrappy and Arco (boarding). It was touch and go for a few days because Daisy loves to play and persisted in her effort to engage both of them in roughhousing. Except for one roughly 24-hour period when Arco obliged her, Daisy repeatedly struck out in her efforts. And the other two were becoming highly annoyed with her. But she’s catching on to how dogs manage these things. And no dogs were hurt in this process. 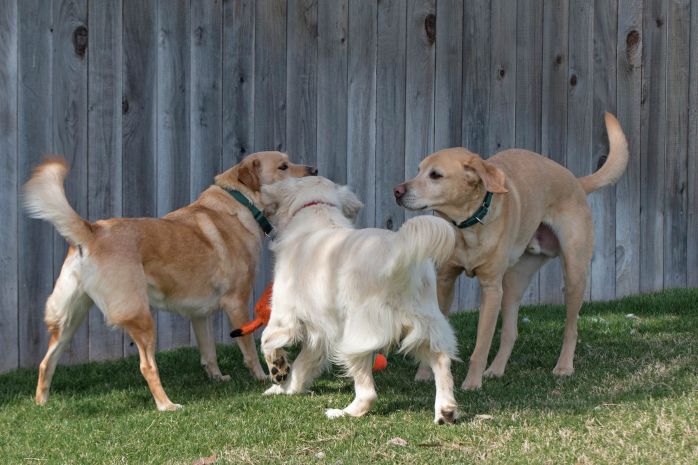 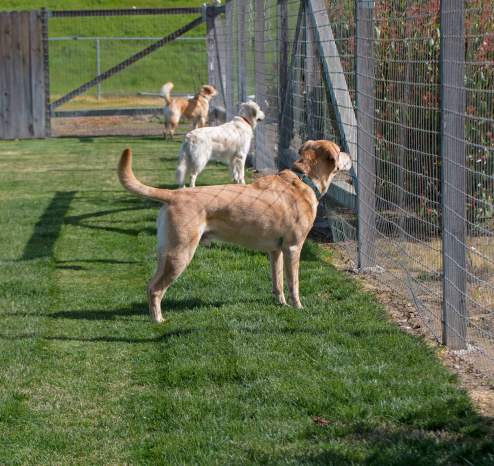 Daisy does have a family waiting for her. Worry-wart that I am, I’m not yet comfortable with her going home yet. But she did get a chance to meet her future older brother, Cody. 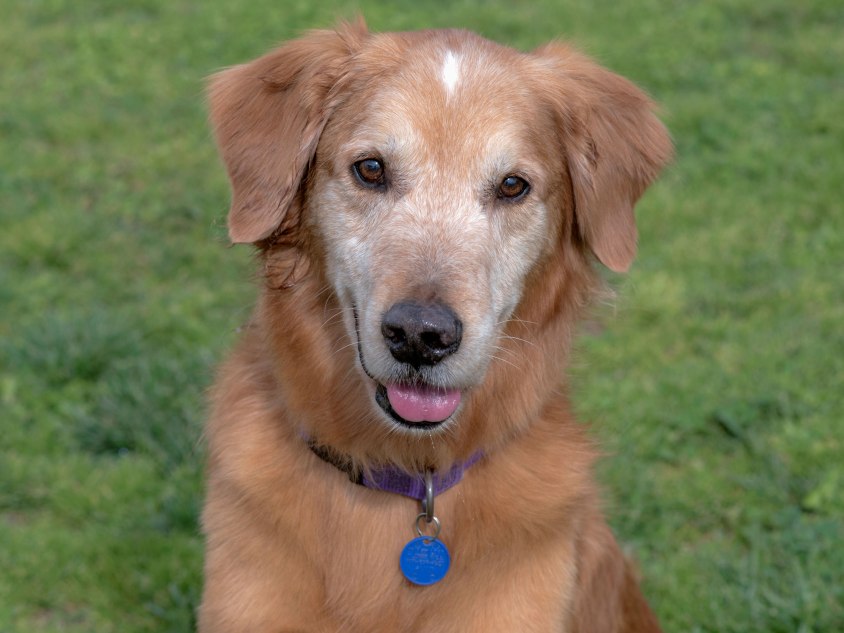 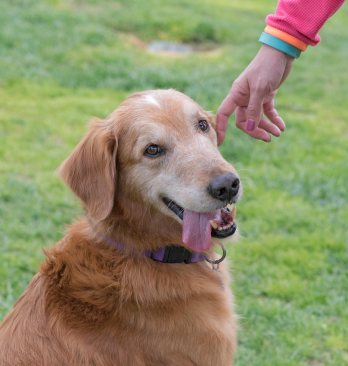 I may try to put him in my car next time he visits. 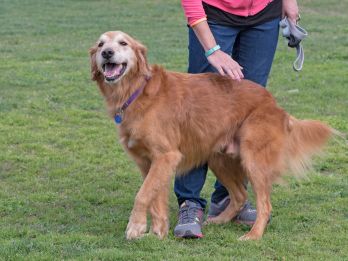 But I suppose they would miss him so that might not work. 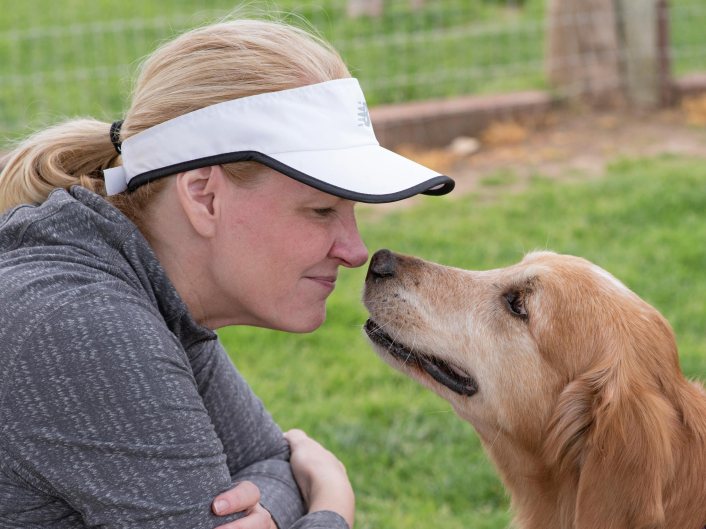 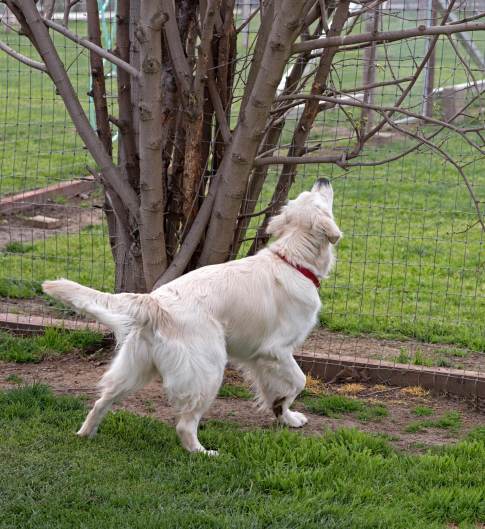 The introduction went well although Daisy spent the first 20 minutes doing some intense birdwatching. Cody and Daisy did finally play together a little, and Daisy seemed able to adjust to Cody’s style. He’s 10 1/2 now so isn’t quite as energetic as he once was. He’s also a retired service dog with impeccable manners. Something we hope rubs off on Daisy.